‘We will not let anybody go hungry’

It is said if you find a job you love, you’ll never work a day in your life.

That’s not quite the case for Jennifer Covert, executive director of North Area Meals on Wheels. She certainly loves her job, but she works hard every day managing her stable of 300 volunteers and 11 staff to feed more than 250 seniors in the northern suburbs.

“Not once have I woken up in the morning and thought, ‘Ugh, I don’t want to go to work today.’ That doesn’t mean I don’t get stressed out,” Covert said. “If there’s stress at work, I leave it at work. I’d rather be wicked busy and have a lot to do and feel good that I accomplished it than be bored.”

Covert was hired in August 2016 as the part-time program director. Earlier this year, she was promoted to executive director. The position is full-time.

“My job just evolved into something so much bigger,” she said. “I just don’t think anyone knew when they hired me what the job would look like.”

Originally from Liverpool, Covert now lives in Baldwinsville with her husband, Dave, and her son, Jaden, who turns 13 in December. She has two grown children, Hailey and Jacob.

While her resume is a varied patchwork — she went to school to become a music teacher, sold makeup and mattresses, sang in CXtec’s corporate rock band, and ran an in-home daycare — the thread that has tied Covert’s career together is caring for others, whether by entertaining people through song or feeding hundreds of seniors.

Covert’s first foray into the nonprofit world came when the family lived in Arkansas. Jaden was diagnosed with autism at the age of 3, so Covert threw herself into volunteering for the Autism Association of Northeast Arkansas. As president of AANEA, Covert presented on autism in 14 counties and several area school districts. She helped families connect with resources.

“I’m passionate about it. It meant something to me,” she said. “I’m very, very proud of what I did with the Autism Association, but it was a volunteer position.”

The Covert family decided to move back to Central New York, and Covert applied for the job at NAMOW.

Covert knew she could be a voice for older people in need, and she said she is grateful that the NAMOW board believed in her.

“They’re so supportive. They trust me,” she said. “I like to be creative and think of things out of the box, and no one’s telling me not to. It’s nice to know they appreciate me — I’m lucky.”

She is even more fortunate to have her staff.

“I have great employees. Every employee that works here is here because they have a passion for this place,” she said.

“Nobody’s here because we want to get rich.”

In the three years since she was hired, Covert has weathered Onondaga County’s client funding wait list and threats to federal funding. Despite these storms, Covert has brought NAMOW into the 21st century by updating the organization’s online presence, devising innovative fundraisers and hiring a case manager for self-funded clients.

“One of my goals when I first started here was to make sure all of our clients are being cared for the same way,” she said.

Clients whose meals are paid for by Onondaga County have case managers who assess their overall well-being regularly and can refer them to other services in the area. Covert began meeting with self-pay clients herself to make sure no one would fall through the cracks, and the NAMOW Board of Directors agreed to hire a part-time case manager.

Covert also strives to uphold NAMOW’s promise that every client will get fed, no matter the weather. She ended NAMOW’s previous policy of closing when area schools called a snow day.

“We will not let anybody go hungry. It just will not happen,” she said.

Now, in advance of winter weather, NAMOW prepares hundreds of “blizzard bags” containing nonperishable food for the days when drivers can’t make deliveries. Not every driver is comfortable braving the blizzard — Covert’s oldest volunteer driver is 93 — so she has a contingent of backup volunteers who can.

“I don’t want to put anybody in danger, but people need to eat,” Covert said.

Covert’s work is attracting attention at the national level. She presented on innovative fundraising and volunteer retention and appreciation at this year’s Meals on Wheels Annual Conference and Expo, held in August in Dallas, Texas.

“It made me happy to put little NAMOW on the map,” she said.

At the conference, Covert presented on NAMOW’s “non-events.” The organization used to put on a gala, which required a lot of time and volunteers.

“I don’t have the manpower to put on massive events,” Covert said.

The fall appeal exhorted donors to stay home and donate from the comfort of their couch rather than dolling themselves up for an expensive gala. It worked: donations poured in. This year’s fall appeal has garnered close to $40,000. In 2018, NAMOW generated $166,432 from fundraisers, including the fall appeal, a golf tournament, annual pasta dinner, bottle drives and other donations.

Covert also has worked with local Subaru dealers during the Share the Love Event. For each car purchased or leased during the event, Subaru donates $250 to a charity of the customer’s choice. NAMOW was awarded $6,765.80 after the 2018-19 event.

While community donors go a long way in helping NAMOW feed seniors and other vulnerable people in northern Onondaga County, the organization relies on more than 300 volunteers to make NAMOW’s mission a reality.

“Seventy-five percent of my job is making sure my volunteers are happy because if it weren’t for them, we wouldn’t be able to do the things we do,” Covert said.

Each holiday season, Covert hosts a luncheon for her volunteers, featuring music and raffles. She also hosts a summer picnic, where the volunteers unwind with a water balloon toss and line up for the Skippy’s Ice Cream truck. During Volunteer Appreciation Week each April, Covert prepares hot meals for the volunteers.

“It’s really about feeding people because that’s what we do,” Covert said. “The type of personalities that these volunteers are, they like to give. I want to show them what it feels like to have someone give back to them.”

It can be difficult to manage “people who don’t have to be here and don’t get a paycheck,” Covert said, which is why she works so hard to let her volunteers know how cherished they are.

That care trickles down into the meals NAMOW serves. Covert said these clients receive more than food from the organization. They also receive companionship, even if it’s just a brief daily interaction with a delivery volunteer. Also, volunteers can check on residents’ well-being and keep an eye out for safety hazards and needed repairs to a client’s home.

“You have your aunts and your grandmother making food from their hearts,” she said. “Everybody here cares, which is awesome.”

North Area Meals on Wheels is located at 413 Church St. in North Syracuse. To learn more about the organization or volunteer and donation opportunities, visit namow.org. 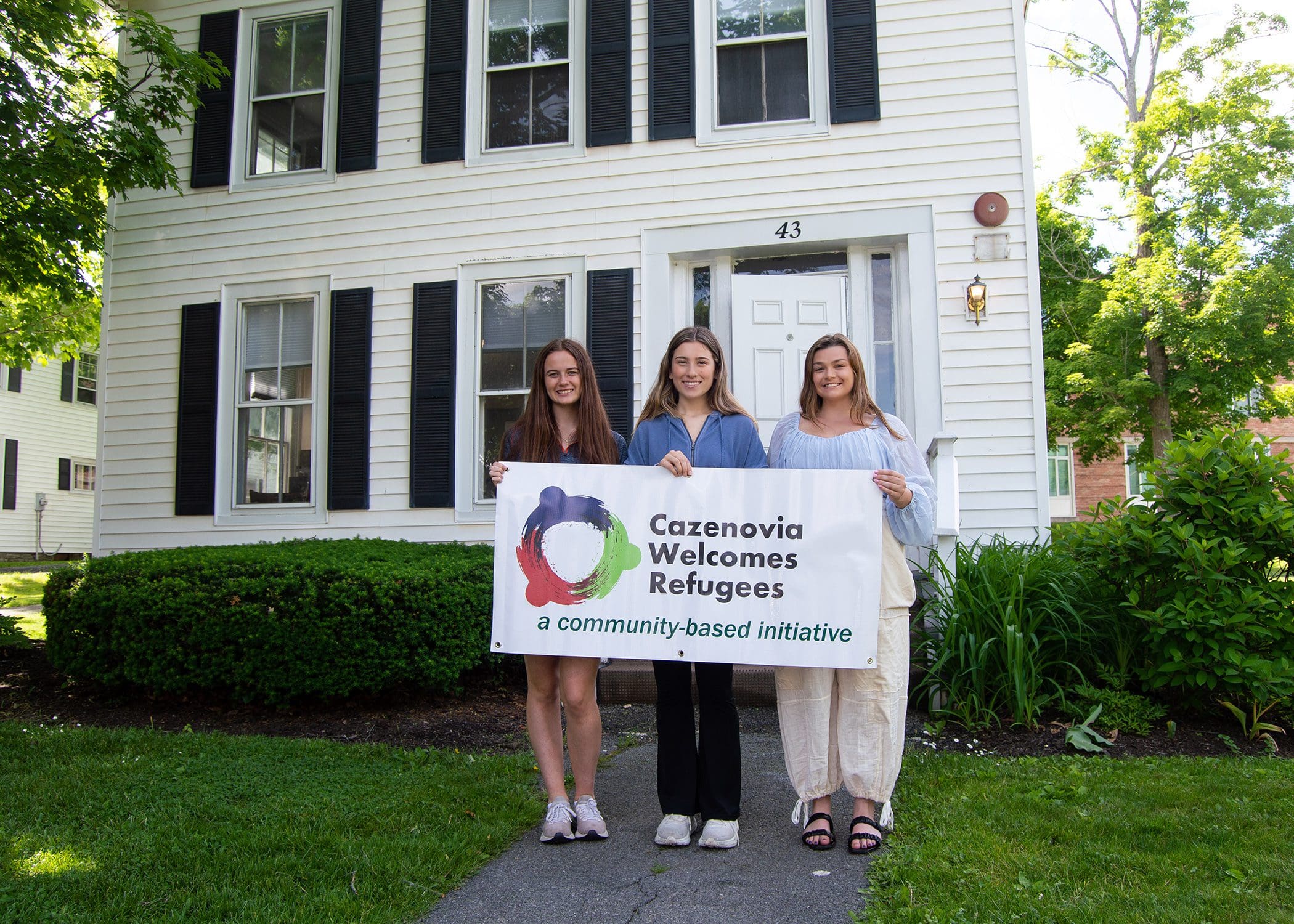